At Innovative Sales Group we build strategic partnerships between Manufacturers and America’s most important retail and ecommerce accounts. Our mission: To provide our Manufacturer Partners with the most professional local Sales and Merchandising Strategy leadership possible.

The Innovative Team had a great week in Las Vegas at CES 2014. No industry shocks you back into full on work mode following the holidays like the CE business! The early part of the week is always spent in sales meetings with our various manufacturers. Their product roadmaps for 2014 look very exciting. One highlight for our team was getting to meet Shaquille O’Neal at the Monster 35th Anniversary sales meeting. If our business in 2014 is as big as Shaq is it will be a great year. As the week goes on we spend a great amount of our time doing meetings, dinners and social events with our customers and factories. Fleetwood Mac played the annual Monster Dealer Awards party and we entertained several of our customers at the event. We always work hard to carve out some time to walk the show floor and look for new and exciting technology. People always ask “what’s new in the CE business” and for 2014 we are excited to be representing existing and new partners in the areas of home automation, wearable technology, Smart Watches, unlocked Android phones and portable power. Watch out for a company named Burg. They have the most fashionable, functional and affordable Smart Watches that we saw and we are proud to be bringing Burg on as a new partner in 2014.

The Innovative Team meets Shaquille O’Neal at the Monster 35th Anniversary sales meeting. Shaq looks big on TV. He’s much bigger in person. Monster partners with notable celebs from every part of the entertainment world to help drive sales.

Innovative’s Got Talent……Hopefully Mariah won’t get jealous of Ashley and Nikki! With Nick Cannon at the Monster Dealer Awards event. 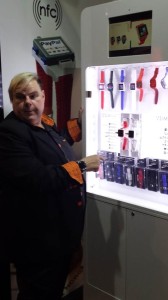 Hermen van den Burg is the founder of Burg Smart Watch. His line of Smart Watches is the most fashionable, functional and affordable that we saw at CES. Adding a SIM card to the watch allows it to function as a cell phone. Look for Burg watches to hit US retail this Spring! 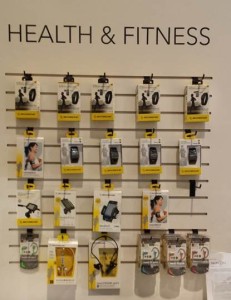 Scosche has a full line of wearable technology in the health and fitness category. Wearable technology is forecast to be a $4.6B industry in 2014. For people who can never put their phone down…… now you don’t have to while you exercise.